An accepted advantage of surgical diathermy Is the shorter time for many surgical procedures. The forceps used for this purpose are analysed in relation to an ergonomic study of hand grips and the related hand movements. This leads logically to design improvements of a type which can be applied more generally. Much surgical equipment design depends on tradition or accident rather than functional needs.

Much time during operations is taken up in applying diathermy to small bleeding vessels. Any improvement in design of instruments that shortens this time is worthwhile, for both patient and operator. Too often, the use of surgical diathermy requires the operator to pick up bleeding points, while an assistant touches his forceps with the diathermy out of rhythm with the operator. One improvement is to have the diathermy lead attached to a pair of artery forceps. Even better, the lead is attached to dissecting forceps (Figure 1). 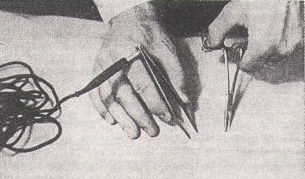 Such instruments are available in several models, covered with insulating material except at the tips.

A ratchet is not necessary if the bleeding point does not have to be kept secured by locking while a knot is tied. The use of artery forceps with a ratchet lock is yet another example of anachronism in surgical instrument design. Diathermy dissecting forceps save the motions, time, and effort of using the ratchet, a brief sequence in time, but repeated many times
otherwise

Secondly, a ring-handled instrument is much more difficult to pick up from a flat surface, especially if it is rigid (Figure 2), 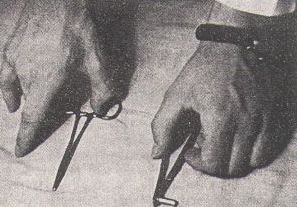 Figure 2: Picking up forceps from a flat surface

and many surgeons find it an advantage to pick up instruments for themselves in repetitive movements of this kind. The thin rings of the artery forceps handles do not stand up high enough to be gripped by the pulp of the fingertip, especially when the hand is gloved and more slippery; the handles of dissecting forceps stand up much more prominently from a flat surface and are easier to grip.

Thirdly, the grip between the thumb and the side of the index finger for picking up dissectors needs less accurate placing of the hand than putting the two digits through ring handles (where they may snag), and can be done by touch without having to take one's eyes off the area of dissection and away from the exact site of the bleeding point. To pick up artery forceps without looking to the side means several fumbling movements, except for the occasional lucky grope.

Fourthly, dissecting forceps are held naturally in a classical "precision grip" (Patkin, 1967) in which the ulnar edge of the hand and the ulnar digits can rest on the working surface to give greater accuracy of placement of the instrument tip; these features are not possible with artery forceps, where the hand must be unsupported in normal use (Figure 1). The greater the accuracy here, the less the volume of needlessly charred tissue in the wound. (Another important factor here is improved visual acuity with a loupe.) Dissectors are also steadied against the apex of the thumb cleft to further increase accuracy of handling. For microsurgical procedures especially, this minimizes the damaging effect of physiological hand tremor.

Fifthly, use of dissectors rather than artery forceps allows other instruments to be tucked into the "ulnar storage grip" of the hand (Patkin, 1967), which saves elements of motion and thereby saves time. The scalpel blade's dangerous appearance in this group (Figure 3) is belied by experience, and in the writer's bands over three years has not led to accidents. 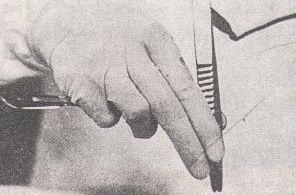 Most types of diathermy dissecting forceps have the socket for attaching the lead in line with the axis of the instrument. When the tips of such an instrument are moved, the diathermy lead has a corresponding movement in the opposite direction, causing drag exaggerated by the direction of the lead. It is more rational to have the lead coming off at right angles, as with Beare's instrument (Figure 4) 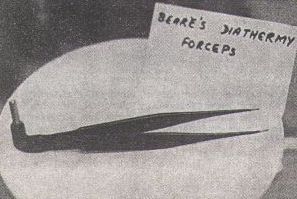 but even with this the socket is attached to the edge of the handle. With the design shown, the socket comes off the flat rather than the edge of the handle; most movement during use occurs in this plane, and so drag is reduced still further (This minor point is tedious to describe, but quickly appreciated when the instruments are handled.) In addition, having the socket in this position makes the instrument lie best for being picked up. This is in accordance with the time-and-motion study element, or "therblig", termed "preposition".

A diathermy lead is awkward because it tangles and catches on sponges or other instruments in the "reach envelope" of the forearm. It would be better coiled like a telephone lead, or some electrical connections in daily use (Figure 5). 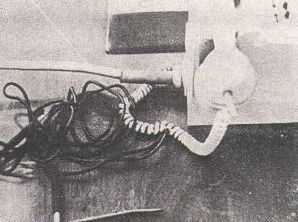 Unfortunately the type of plastic that keeps a coiled shape is not a satisfactory insulator for the high currents of a diathermy machine. Despite approaches to manufacturers, this little problem still awaits a practical solution.

Stiffness of the dissecting forceps must also be considered. If too much force is needed to close them, the fingers tire and become less accurate; if too little force is needed the instrument will slip out of the grip in which it has to be held so slackly that the jaws stay open. Many surgeons will be surprised to know that a recommended pressure range for jaw closure has been published by the British Standards Institute (B.S. 2821, 1957) nominating levels of 6 to 10 oz (170 to 285 gm), depending on the length of the forceps.
(Fig 6). 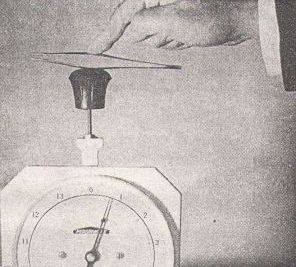 Design of the handle surface has also been standardized by the same authority, but for some purposes there should be useful improvements possible. One innovation is to make the combined cross-section of the closed handles more or less circular so that they can be rotated between the pulps of the thumb and index like a watchmaker's screwdriver. Such a prototype, designed for microsurgical procedures, has been achieved by soldering hemicylindrical lugs on to the flat handles of watchmakers' tweezers (Figure 7). 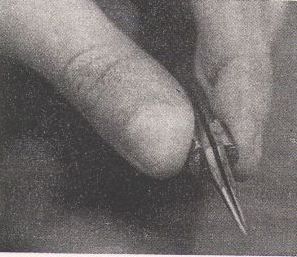 The foot-pedal control of diathermy machines has not been analysed in this study. The groping movements of the surgeon under the table as he seeks to actuate the diathermy current suggests that this problem also merits efforts at practical solution. One approach is to incorporate the switch mechanism on the diathermy "stick", but it would be more complicated to add a switch to forceps.

The writer's diathermy dissecting forceps have been used in a small country hospital for three years, and more recently in a busy general surgical unit. During this time the instrument appears to have saved operating time and effort, especially in making abdominal incisions. Some burns have occurred to the skin edge due to insufficiently fine jaws, but the overall result has been drier fields during operation.

In normal use the diathermy forceps are placed on the drape within the "envelope of reach" of forearm movement. Bleeding points are dealt with individually as they are.met, rather than after one single large cut from skin to deep fascia recommended by some surgical teachers. In the words of Moynihan (1920):

If blood leaks into a wound It stains the tissues, and makes subsequent dissection along the "white line" very difficult along which dissection can proceed very easily and quickly, and with the immediate disclosure of all the vessels which must be seized.

The actual saving of time and effort (compared, for example, with adrenalin infiltration) must be guessed at until later measurements are made of videotape playbacks of operative procedures. Until then, the virtues of diathermy dissecting forceps are a matter of opinion. Some would consider that the assistants available in a large hospital make these advantages less important.

Once again I am grateful to Mr Geoff Olsen, of Messrs Davey and Olsen, Motor Engineers, Dungog, for making the prototype instrument from a pair of plain dissecting forceps. Mrs M. I. Cornish, B.Sc., of the Central Sterilizing Departmont at the Royal Newcastle Hospital, had the forceps adapted to machines at the Royal Newcastle Hospital. Useful and encouraging comments, have been made by a number of surgical colleagues widely scattered in time and place.