The hand has two grips: an aspect of surgical dexterity
Lancet, 1965

Every table tennis-player knows that the hand can control two balls comfortably (fig. 1).

Fig. 1 A double grip of the hand

Similarly, the car driver can control both the steering-wheel and a cigarette placed between index and middle fingers. Surgeons also use their hands for multiple functions at the same time; but little attention has been paid to this, since descriptions of operative technique usually concentrate on the tissues and instruments.

A pair of dissectors can readily be stored out of the way with the ring and little fingers securing the instrument against the palm. This leaves the thumb, index, and middle fingers free to tie a knot (fig. 2). 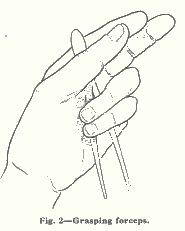 Fig. 2. A storage grip of the hand used while tying a knot

This technique is used for interrupted sutures: it saves putting down the dissectors (often out of the field of vision) and picking them up again.

The saving in time lies not in the increase of speed in each motion, but in eliminating unnecessary movements. There is the disadvantage of learning a new technique, but the time and effort taken are very little compared with the permanent improvement in operation.

Dudley and Jones 2 have described how the surgeon can maintain traction on a continuous suture with the left hand, without the need of an assistant, whilst the right hand wields the needle. Gentle traction by the left hand everts the suture line and presents it to the needle (fig. 3). 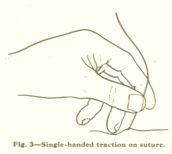 Fig.3. A variant of double hand grip when following a continuous suture

The practice of some surgeons goes beyond this. The suture to be kept taut is slipped behind the ring finger, so that it then lies in front of the middle and little fingers (figs. 4 and 5). 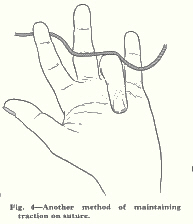 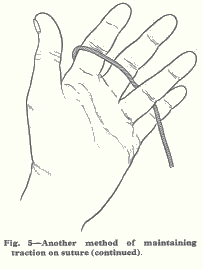 Fig. 4 Placing a continuous suture behind the ring finger to achieve tension on it.

Fig. 5  Pronating the hand with a continuous suture under tension

With ordinary tension it cannot then slip. This leaves the thumb and index free: they can gently squeeze the tissue to be stitched, which makes it pout a little and present itself better to the needle; or backward pressure with the fingernail can create a little ridge and furrow in the tissue for the same purpose, as described by Devine1; or the thumb and finger can spread to part the overlying tissues for better exposure (figs. 6 and 7). 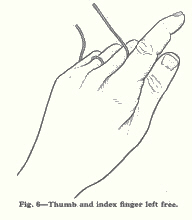 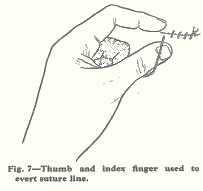 The other advantages of the technique are a smoother rhythm, control of tension by the operator, presentation of the line for suture without the use of forceps, and freeing of the assistant to ply a retractor.

Cutting sutures and strapping off a reel

Except when the reel is heavy or fixed, cutting off a length of suture or tape is usually done by two people. But one hand can hold the strapping at two places. One grip is between the thumb and ring finger below, and the other grip is between middle and index fingers above. The tissue, tape or suture can then be cut easily between the two grips. (Fig. 8). 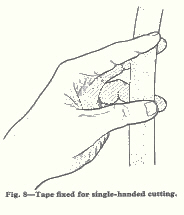 Fig. 8. Tape fixed (tightened) for single-handed cutting. This double grip of the hand can be used for tensing tissue such as small intestine and adjoining mesentery, or tape or a suture.

A simple analysis of the hand actions of the surgeon shows that one hand can be used for two tasks at the same time. Whether consciously or not, time-and-motion study can be applied to operative surgery with benefit.

The hand has two grips: an aspect of surgical dexterity

I was inspired to write this during my time as registrar to W.J.Ferguson, consultant surgeon at the West Middlesex Hospital. He was a strange physically small man with a lovely smile but quite "the chief" in the English tradition of the time.

He had a formidable reputation as a gastrectomist, ranking with Norman Tanner at Charing Cross Hospital.

Every gastrectomy began at 2 o'clock on a Tuesday and Thursday afternoon. It took 50 to 55 minutes, was done under epidural anaesthesia, with infiltration of the line of incision with adrenaline and local anaesthetic. Blood loss was less than 50 ml. No patient had an intravenous drip after surgery, and was kept hydrated with rectal tap water. That's unusual!

There is a lot more to say about his technique, his personality and style.

He had learned gastrectomy as registrar to Sir Heneage Ogilvie at Guy's Hospital, and Ogilvie had learned this from Finsterer in Vienna.

There is lots of entrancing historical gossip about each of these remarkable people.

His expertise resulted from a combination of huge experience (about 3500 gastrectomies at the time), team leadership, economy of movement, tissue handling, operative tactics, choice of instruments, and remarkable team discipline